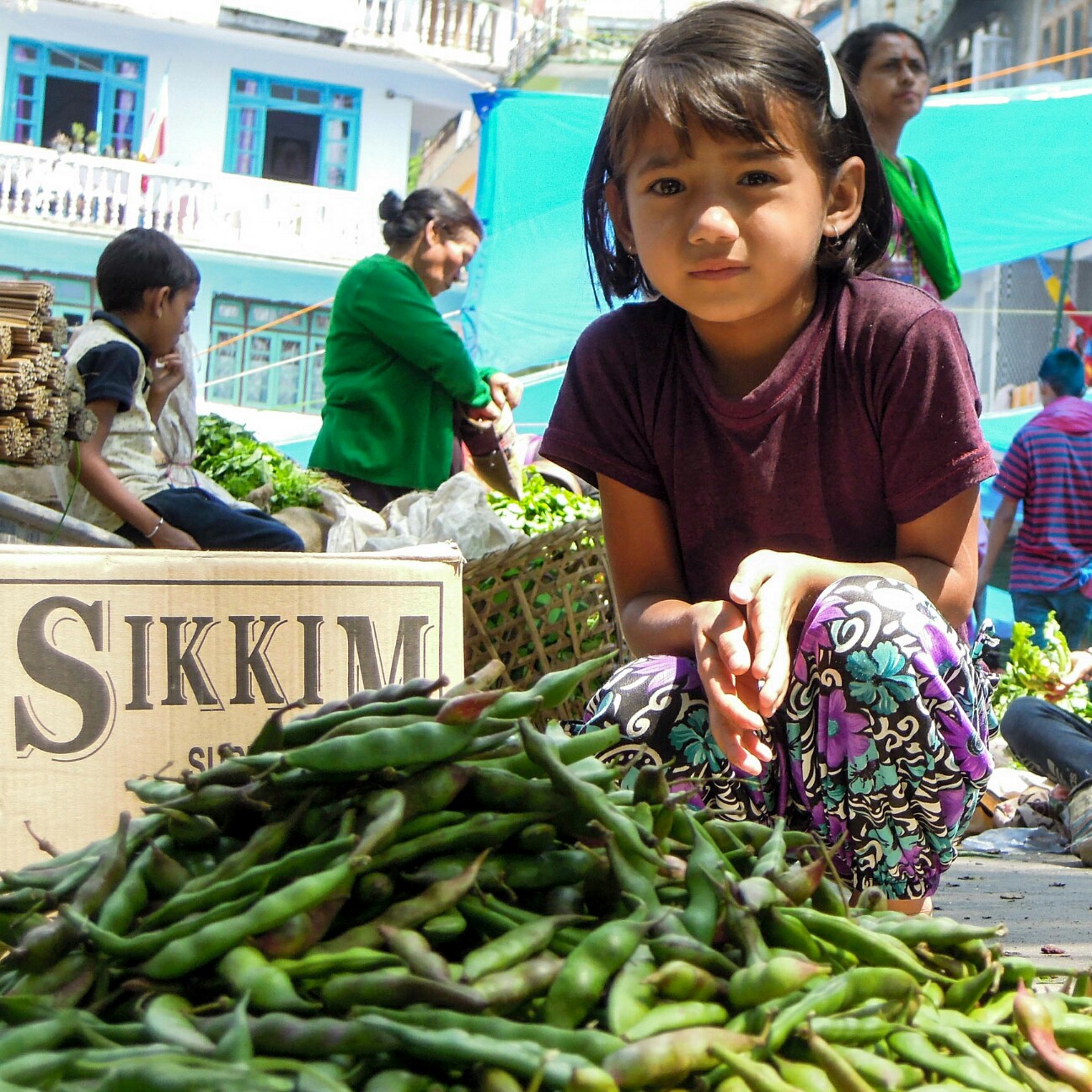 On Sunday, we visited the weekly farmer market in Gyalshing. This small, sympathic town – also spelled Geyzing – is the main one in West Sikkim. We wished to know more about the organic products the farmers are selling to the local, urban people. And we wanted to buy some regional vegetables, spices and fruits. Mister Sonam Dadul Buthia, the gentle owner at our Hotel Ivory, had promised to cook for us a local, 100 % organic lunch.

But then, Mister Santosh Gautam, Mevedir‘s West Sikkim field operator, heard about our plans. And organised a gathering of very important persons in town. Therefore seven persons were waiting for us in front of our hotel on Sunday morning: Three local authority’s councelors, the Sunday market’s president, a Nepali 1 cameraman, a soldier to protect us and Santosh, our agricultural guide. 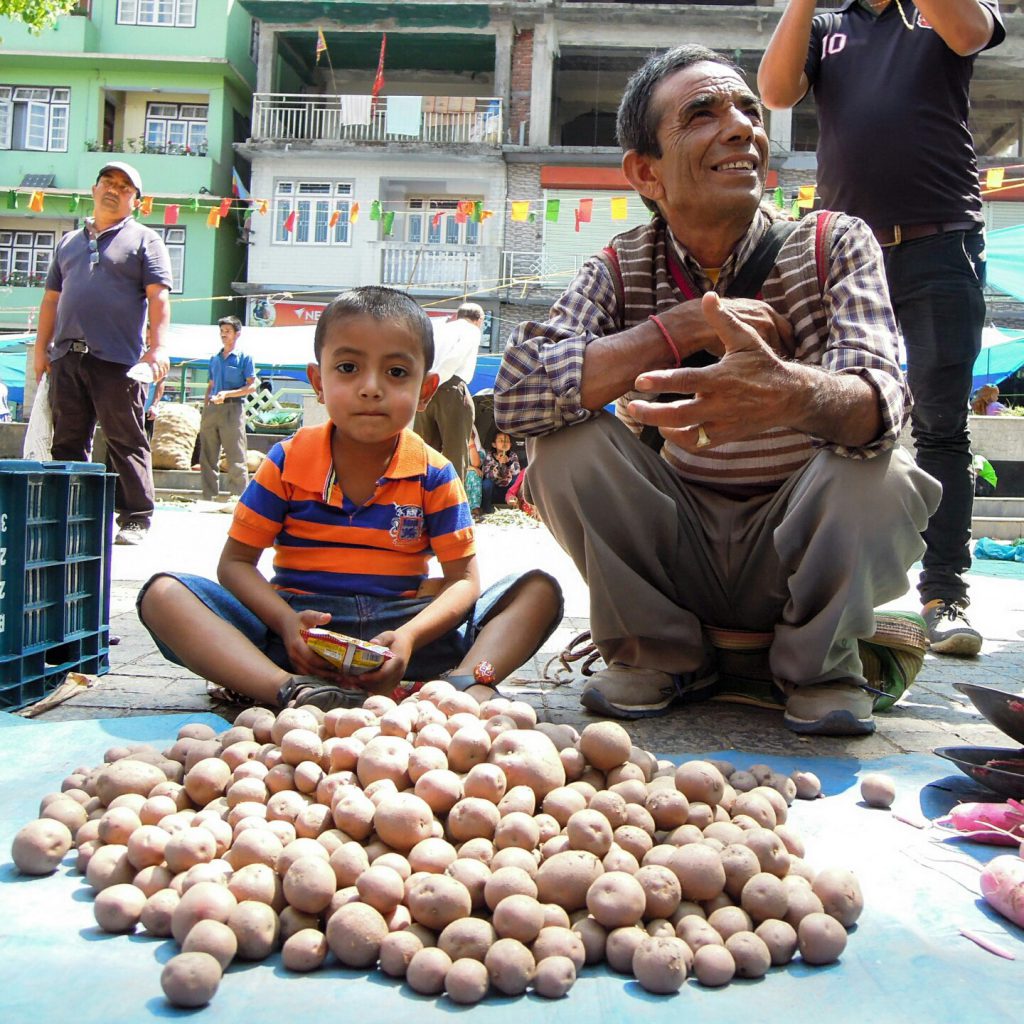 Finally, we went up to the market in a throng. Arrived there, my first impression was: Astonishment! There sat a farmer selling some kilograms of potatoes. Really tiny ones. Very old women with golden jewelleries in their noses sold a few handfuls of green leaves. Colourful dressed women offered a little bit of dried somethings. How can they earn money? Can farmers live on a market like that?

The second impression was: Esteem! With a detailed glimpse I saw an extremly wide product diversity. There were so many different plants! I knew some vegetables or spices like potatoes, beans, tomatoes, cabbage or turmeric from Austria. Some like chayote or bitter melon I got to know in Southeast Asia. And the round red Dalley pepper we have seen at the farms the day before. But there were a lot of unknown things: filled sheets, vines, grapes with small berries, fern, dried leaves, … The plenty of nice persons accompanying us helped with pleasure. 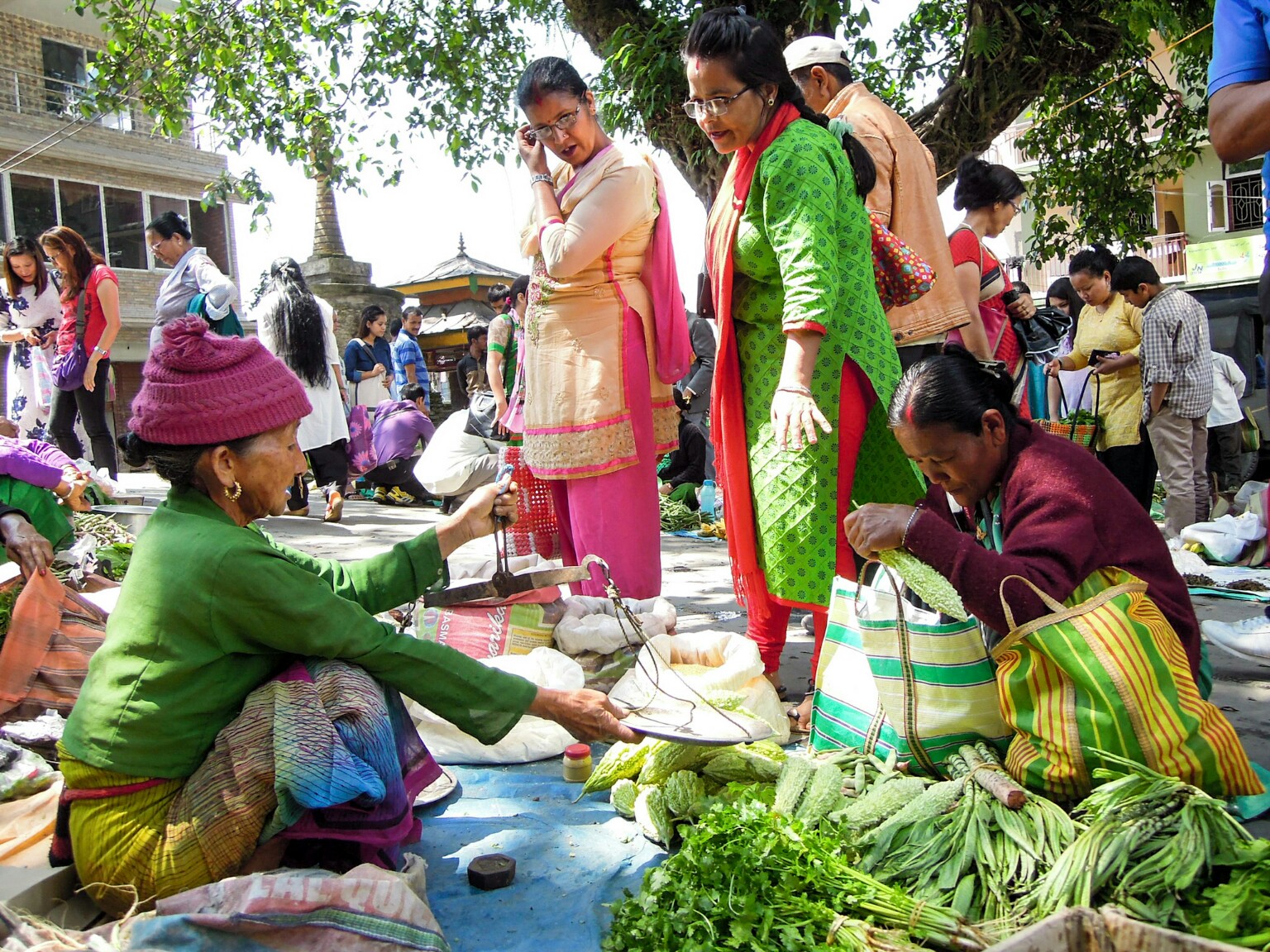 They showed us the tiny green berries called timbur in Sikkim. Timbur grows wild and is collected in the forest. It is used as a medicine plant when you are suffering from indigestion. The taste was very spicy, but lemony and fruity and very interesting! Then Mister Agarwal, one of the councelors, opened some leaves and let us try fermented soybeans called kenema or kinema. We bought both for lunch. Next, Santosh showed us local buckwheat flour used for special traditional bread. We wanted to try this kind of bread, too. 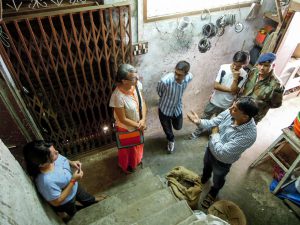 The Sikkim Government decided buckwheat to be one of Sikkim’s cash crops. The others are ginger, large cardamon, turmeric, baby corn and mandarin oranges. Probably therefore our guides showed us proudly one storing place for large cardamom and one for ginger. As I understood, these local traders didn’t sell ginger or large cardamom as organic to the Indian market.

Organic farmers don’t have to pay

When I asked my accompanist, how she can distinguish between Sikkim organic and Siliguri nonorganic vegetables, she answered the Sikkim products look fresher. She can see the difference. And she told me, the retailers with West Bengalian vegetables have to pay for their market stalls, while Sikkim farmers are ridded of this fee. What an interesting idea for Viennese markets! 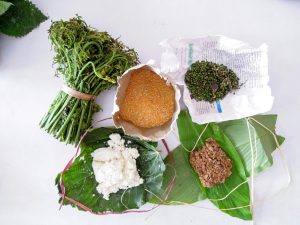 After this interesting walkabout we were interviewed by Nepali 1, a local TV station. Hence we came back late and showed our food to our hotel owner: Buckwheat flour and grits, fresh fern and nettles, timbur, kenema and fresh cheese. Mr. Sonam wiggled his head to show us his accordance. And his young cooks disappeard in the kitchen.

A great local meal and a new beer 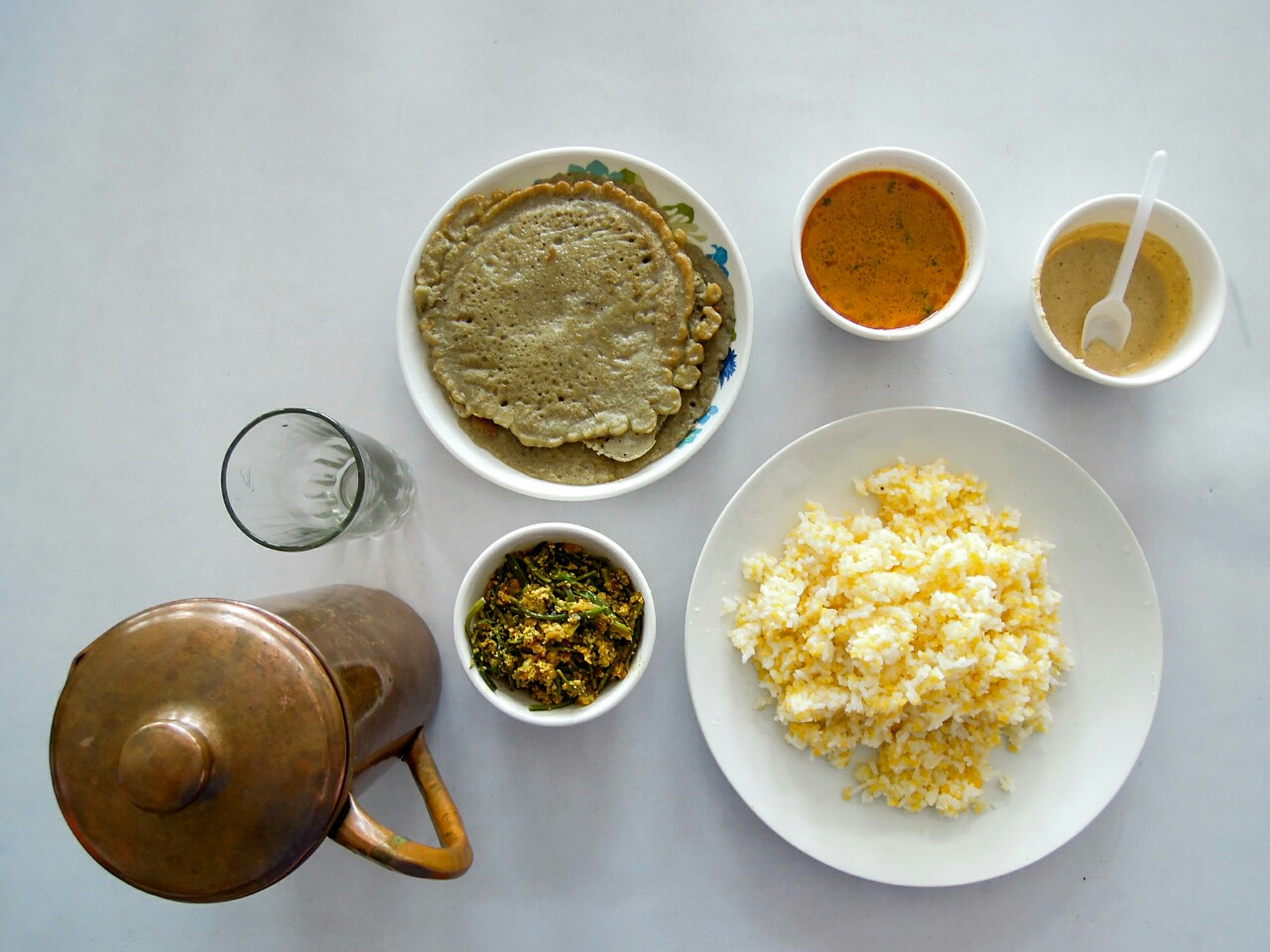 In the evening we met some of our market companionships again. Santosh and Mr. Agarwal drank whiskey, two ladies prefered water and we tried millet beer served in a bamboo cup. It works like this: Fermented millet is poured with hot water. Then you have to wait for five to ten minutes. And then you drink the hot liquid with a straw. When the cup is empty, you can pour hot water onto the millet once or twice again. A nice way of drinking alcohol! 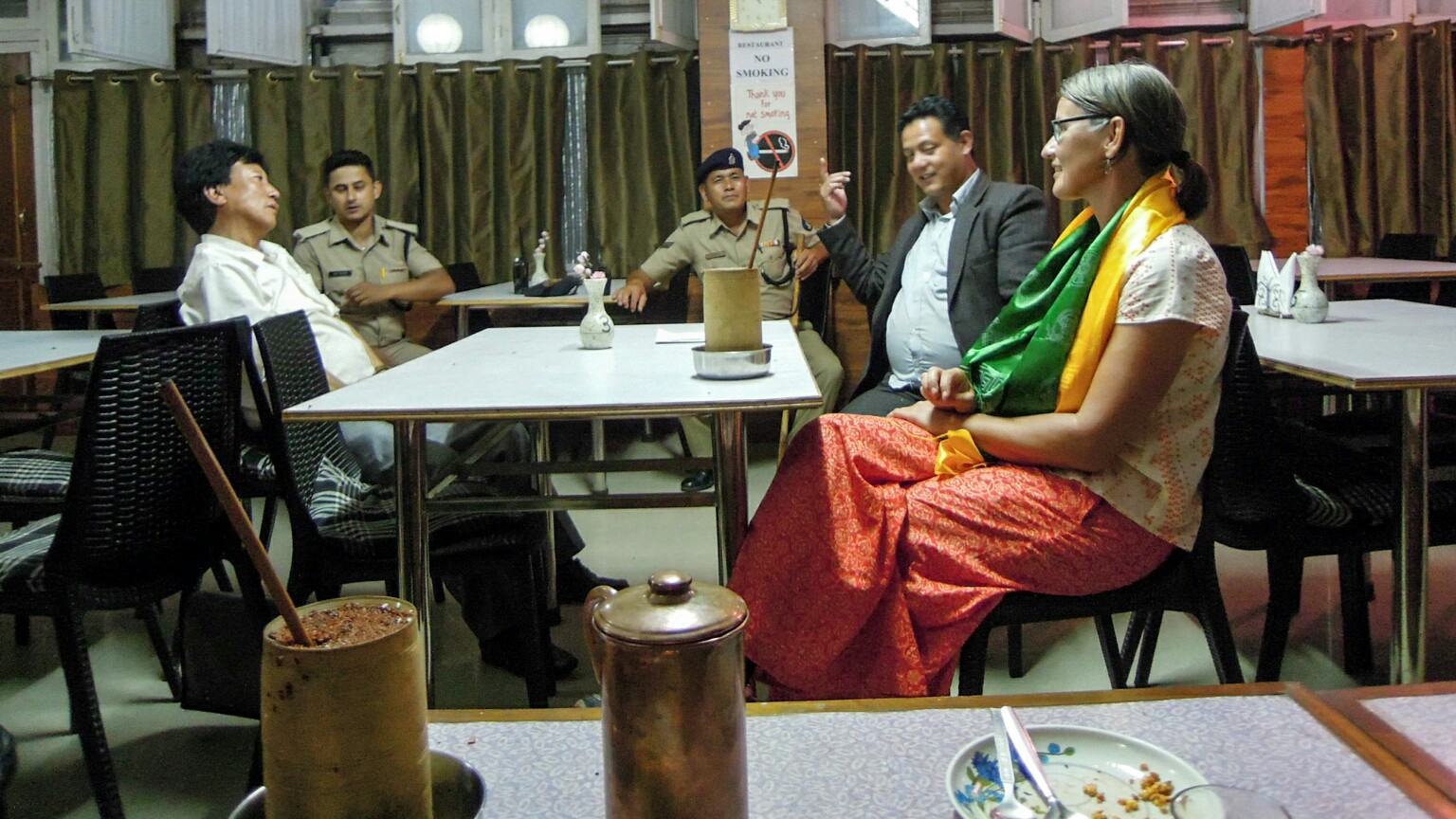 Later, two soldiers joined us for a while. When all men were drunk, we went to bed. We had an interesting day full of new flavour and local plants. Thanks to all persons in Gyalshing – or Geyzing – for their warm welcome! Hope to meet you again!

For detailed imagines please click into the first picture. 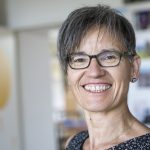